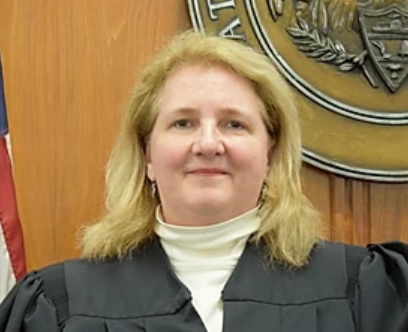 Cleburne County Circuit Judge Holly Meyer has declared the CDC moratorium on evictions during the pandemic unconstitutional under both the U.S. and Arkansas Constitutions.

It doesn’t count as a precedent anywhere else, but who’s to say it won’t provide a roadmap for landlords in a state already deemed to have the worst laws for renters in the U.S.

The Centers for Disease Control, citing statutory authority, has ordered a temporary moratorium on evictions for people living in housing supported by federal loans or programs. It’s not easy to get the protection.

Tenants must declare they are making their best efforts to get assistance and make payments and they’ll be homeless if evicted. They also must submit to a landlord a completed and signed copy of the declaration.

In the Arkansas case, landlords Aaron Ray and Serena Ray sought to evict Cindy Woodall and William Woodall from a house they’d rented since early 2020 in Heber Springs. The Rays had an attorney, Albert J. Thomas III of Bentonville. The Woodalls did not.

One of the defendants submitted a declaration. One did not.  Given an opportunity to work out matters, the debt wasn’t resolved though they made some partial payments before Dec. 2, the judge said. She also questioned the credibility of one defendant’s claim of having attempted to get assistance and noted both were employed and said they had not presented financial statements.

But the judge decided the CDC order was unconstitutional. In short: Because Arkansas has taken no action to help tenants avoid eviction, an Arkansas court shouldn’t either. The relevant passage from her order: 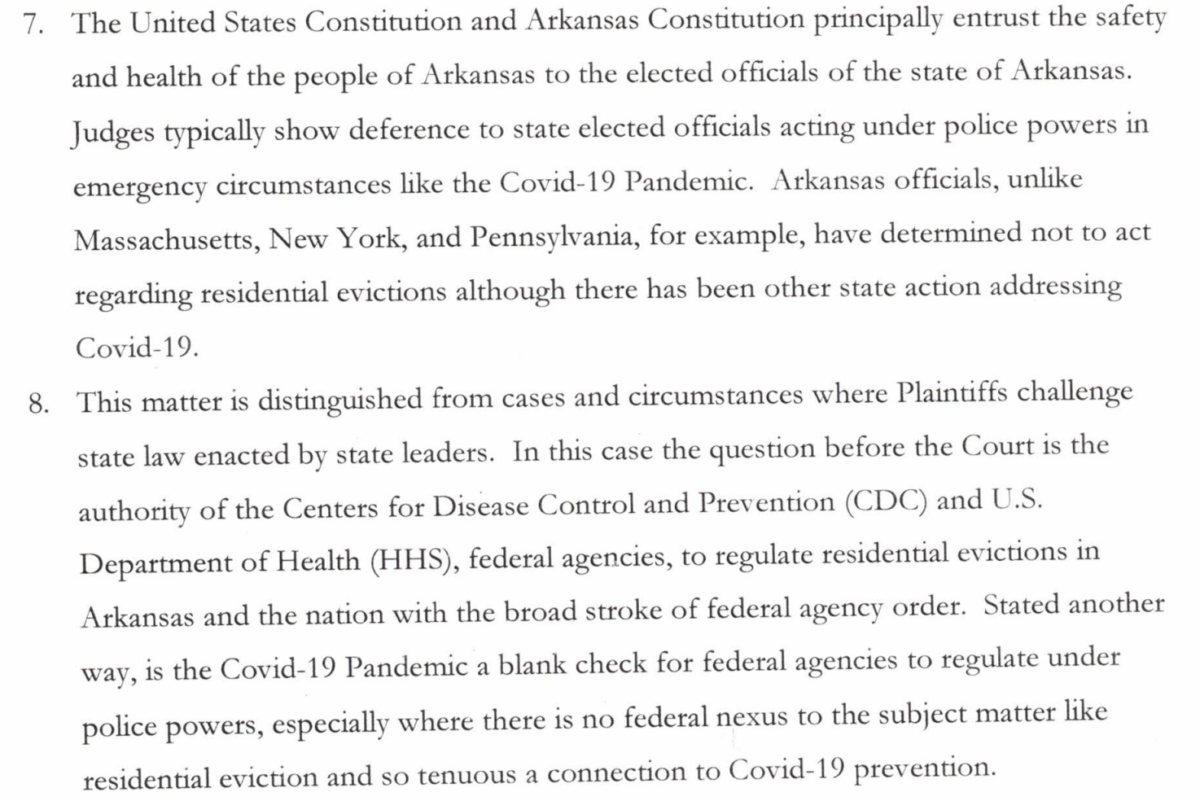 The judge acknowledged that her decision differed from a ruling by a federal court in Georgia that the moratorium was constitutional. She wrote that the Georgia decision amounted to an “affront to liberty.” Noting that the Arkansas Constitution puts property rights above all others, she wrote:

To find that every single residential eviction, under the terms of the CDC order, in the entire nation, whether in Alaska or Arkansas, whether urban or rural, measuring income uniformly across the nation, regardless of the myriad of circumstances that all these residential evictions present, should be covered by this order is arbitrary and capricious

Further the rationale is too far removed to find that this order is reasonably necessary to prevent the spread of COVID-19 in this matter. (Not getting out of bed also prevents the spread of COVID-19.) If this federal agency wishes to infringe on property rights in Arkansas it must specifically evaluate its regulations and narrowly tailor them to respect Arkansas property owenrs’ constitutional rights and the legitimate ends desired. If the agency or federal government intended a welfare program, rental assistance for example, which this closely resembles, it should be funded and not masqueraded.

She said she was “offended” that a federal agency, with “dubious” statutory authority had attempted to regulate Arkansas residential evictions and “override Arkansas law.”

(I’m reminded of the 1960s when a federal agency was enforcing school desegregation despite Arkansas law and Constitution to the contrary.)

She issued the order necessary for eviction “forthwith” and entered an $1,800 judgment against the defendants, with interest. This covers money she determined was owed for September and October.

The order has no precedent except in the judge’s court. Other judges have taken various steps to delay evictions during the pandemic, but the Arkansas Supreme Court recently effectively reversed without a hearing an order in Pulaski County that wouldn’t allow a county clerk to issue an eviction document without a hearing. Those evictions have proceeded when tenants didn’t comply with the CDC guidelines and hadn’t paid rent on covered dwellings.

The Cleburne County decision is a departure from what tenant advocate Lynn Foster reported earlier this month on proceedings around the state. She said the CDC moratorium was holding up fairly well in court and helping many tenants, though not all landlords were accepting the declarations or accepting rent assistance.